A day trip for Joy and I, not a big day out but fantastic weather (almost down to t-shirts at one point). Most of snow had been stripped away, but still looking wintry on the hills.

The route started at Hartsop and contoured up and back to angletarn pikes and back round and down again. 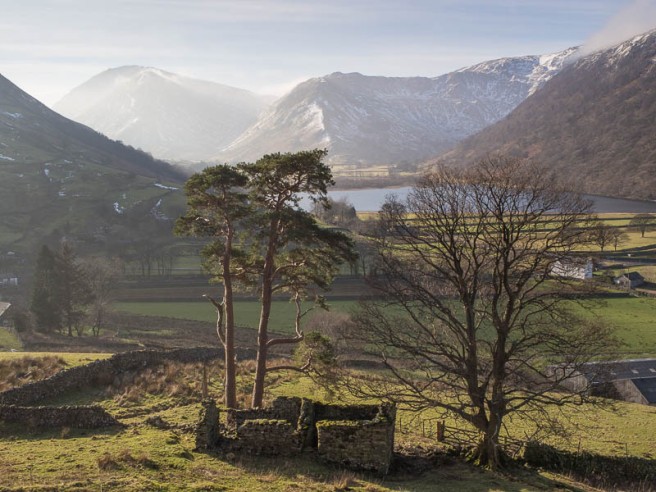 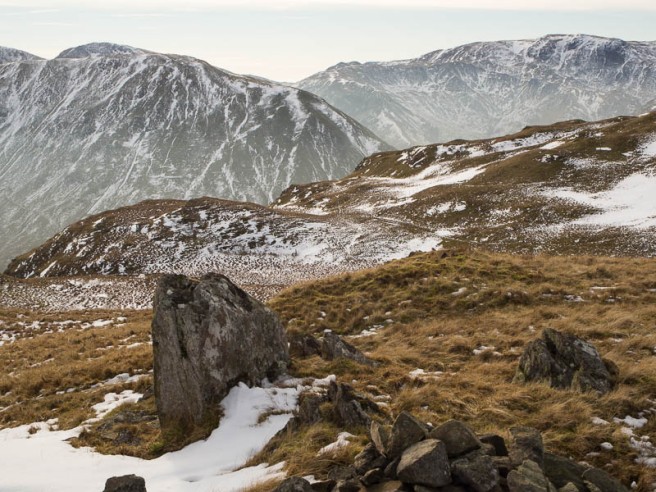 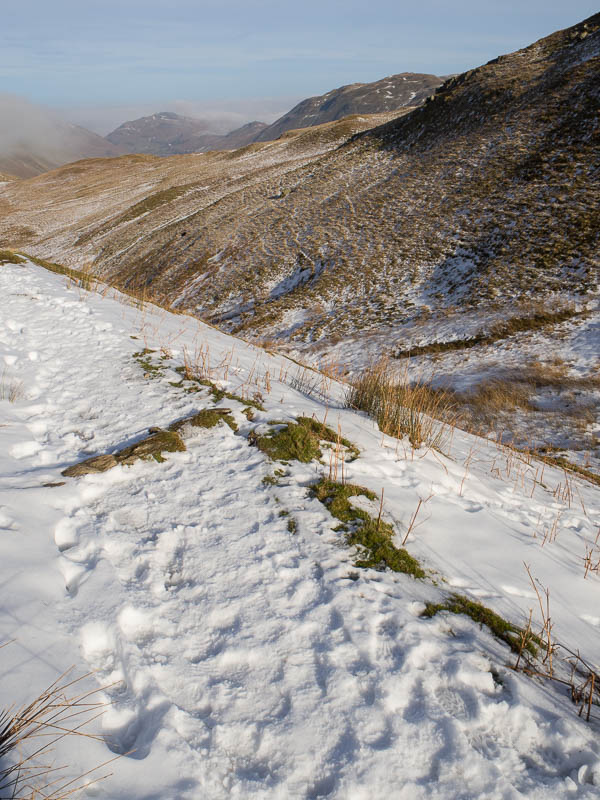 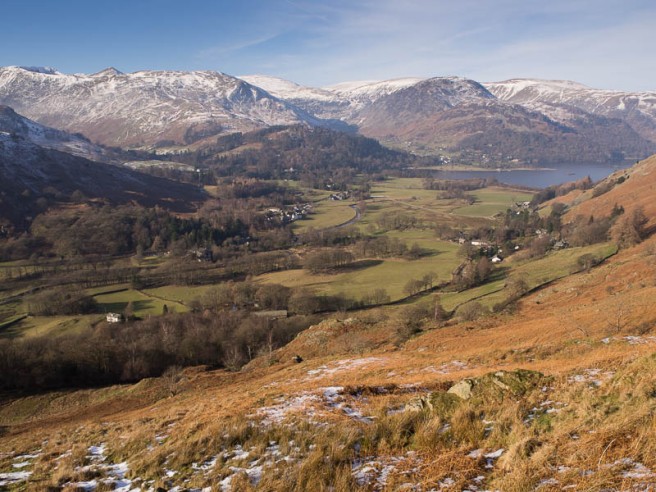 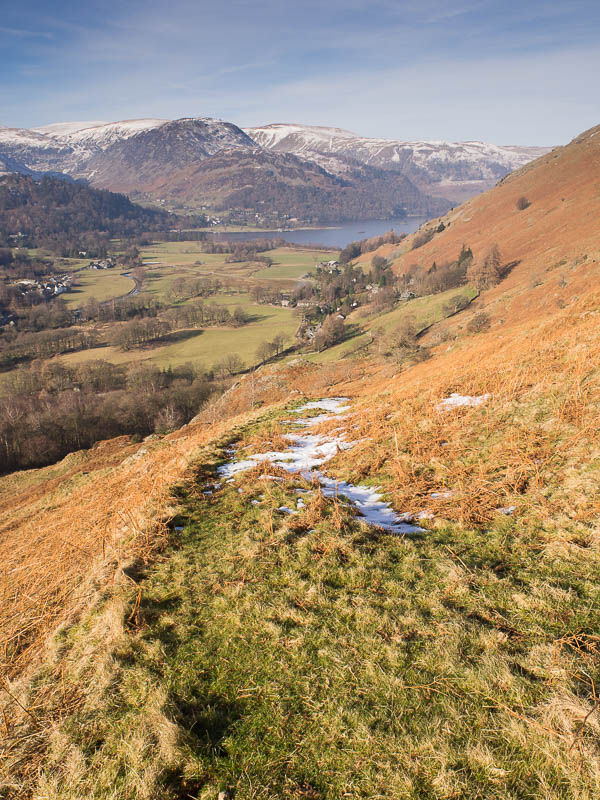 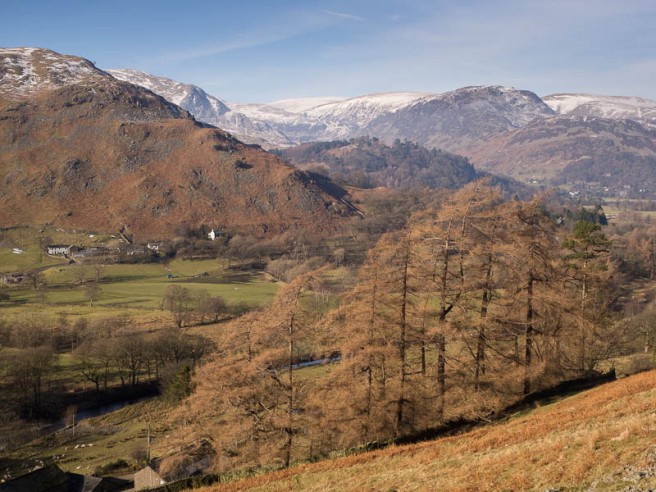 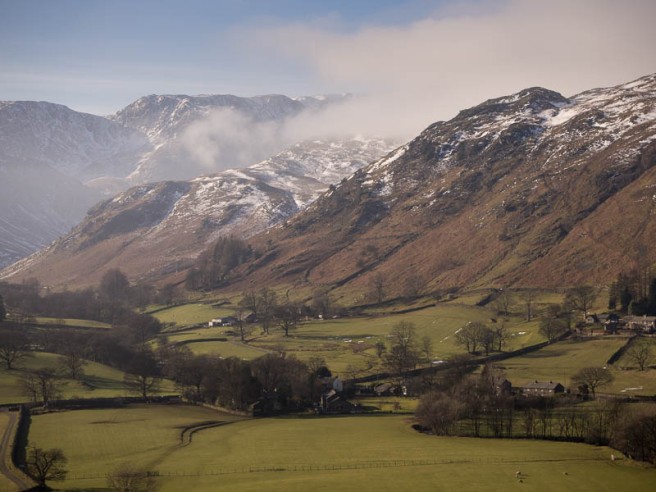 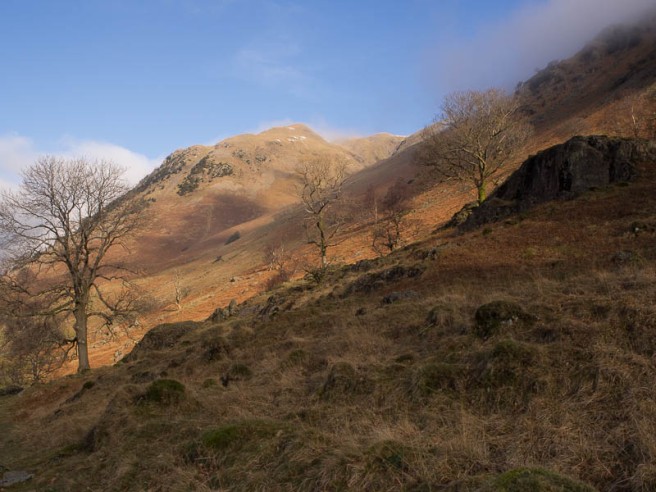 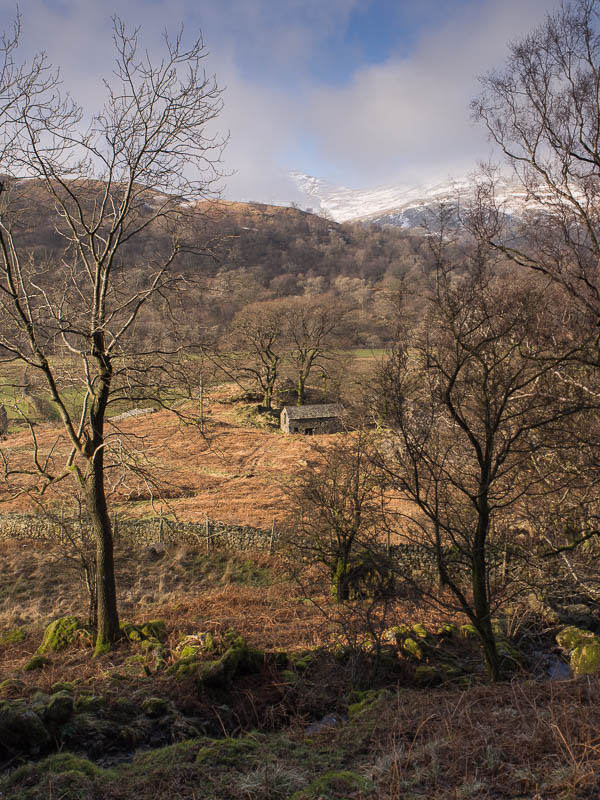 The forecast was for grey but dry weather. I thought the cloud would be too low for high mountains and the local hills would be very muddy, but the limestone dales would be a good bet and I hadn’t been to wharfedale for a while. I thought I’d try and plot a route from grassington to great whernside, a route I haven’t done before and which I wasn’t sure about – great whernside has extremely boggy and featureless flanks and navigation in fog is very hard. But I had several contingency routes. I parked at threshfield and had the bonus of finding a new café for a quick pit stop – very nice. Navigation wasn’t too hard to start with, mostly just comparing the walls against the map. The fog was down on the hill top and I decided against a route straight to the top – from the direction it would be very easy to stray off into either very unpleasant boggy terrain or off the other way towards nidderdale, so I kept by the wall side intending to contour until I got to Dowber Gill, then I could cross that and pick up the main route up, which is easier to follow and more solid. This turned out to be a good call.

It was well frozen under foot which made quick walking, but better views would have been nice. I stopped for a picnic at capplestone gate, at the start of the open moorland section, where there’s an interesting outcrop of gritstone in the mostly limestone landscape.

Walking along the moor next to the wall was easy. When I got to Dowber Gill I checked the time and the mileage and got a shock when I realised how far the return was along the dales way. There was no way I had time for the summit so I took the left turn straight down to Kettlewell and another picnic. It was about six miles back, which was just doable in the daylight left, but I needed to get home at a more reasonable hour so I took the road to Coniston and on to grass wood, which was very pleasant and back to the car by four thirty. 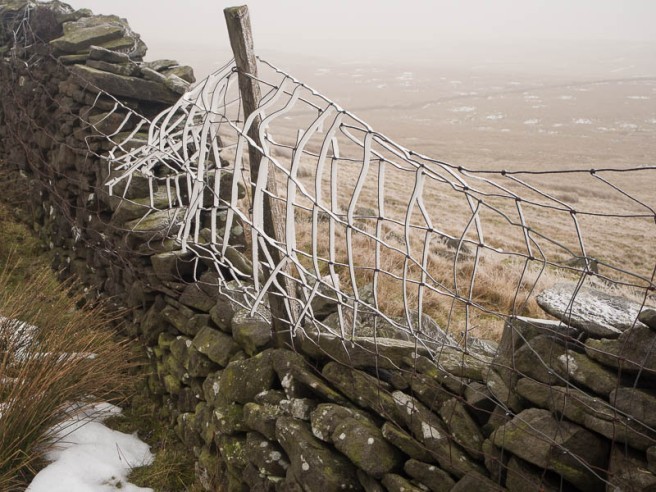 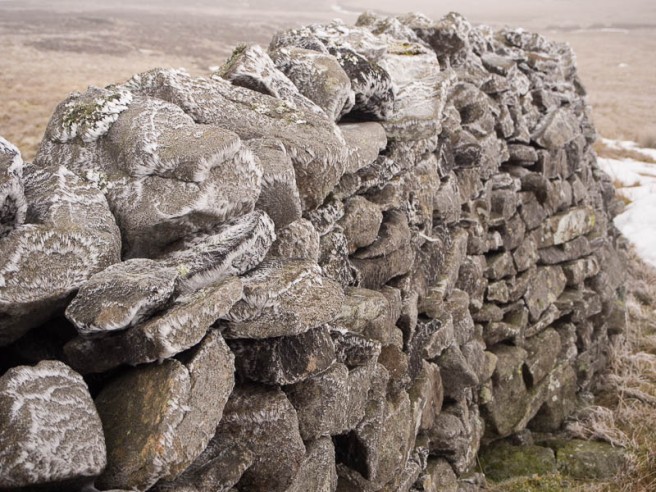 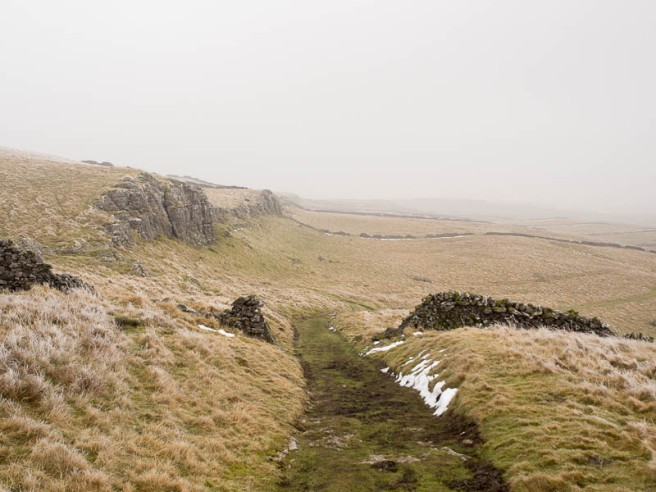 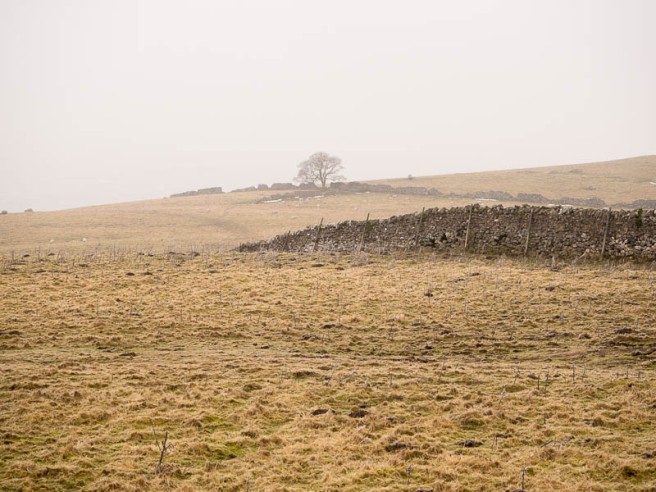 The forecast was good and promised plenty of snow and ice on the ground so I wanted a day in the lakes. I was going with a friend, Arend, and gave him the choice of walk and he fancied a repeat of wetherlam.

The car said it was below freezing at the tilberthwaite car park but it was blue sky and looked perfect. The ice started straight away, with soft snow off the path and hard icy snow or clear blue ice on it. I didn’t need to navigate as I’d done this route twice before so we made good progress, apart from frequent stops for photos in the amazingly clear crisp air. 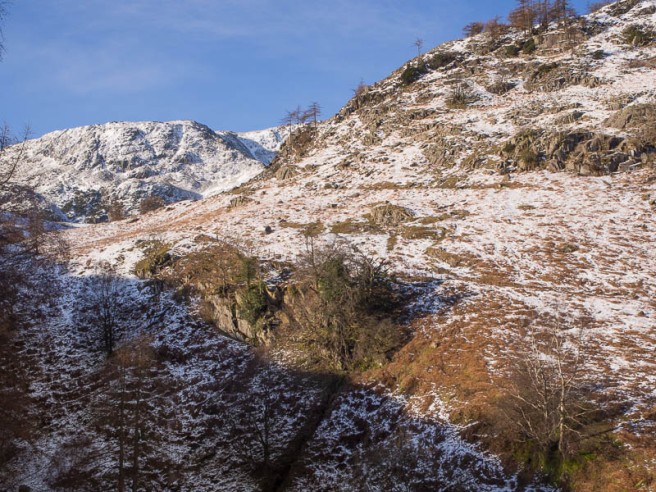 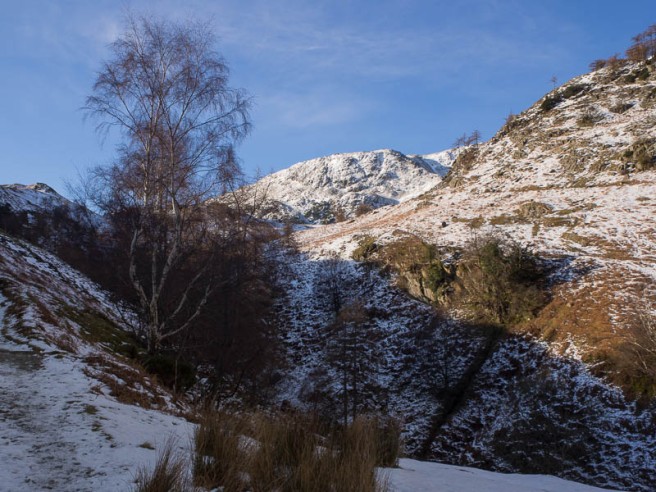 When we got to wetherlam edge we had more footprints to follow than my last trip and we trod the exact same path up the scrambly rocks and stopped in the same place to put on crampons. This was a good call, the path was even more iced up than last time with fantastic great masses of flowing blue ice on the rock steps and hard packed snow otherwise but we were at the summit in good time. Ducking below a rock gave us a windless perfect picnic spot.

We looked  at the returns and decided we had time to extend the day down and up to swirl how. This was a great route, very icy, but an easier path than wetherlam edge and we were at the next summit in no time.

Crampons off, as the ongoing ridge was scoured clear of snow until the saddle at levers hause. I checked the location with three compass bearings – I didn’t want to choose the wrong way down with the paths not visible under the snow.

The way down to levers water was easy in the deep soft snow. We had plenty of time contingency, as we could, if necessary, manage the track and road from the youth hostel in the dark, but we pushed on quickly (Arend being significantly younger and fitter than me) and got back to the car just as it was getting dark.

The forecast was for heavy snow all night and all day. Sunrise showed plenty of new snow but a bright sky. I didn’t want to drive, I thought the roads would get blocked, so a high level walk to Hebden Bridge and back looked good, then I could get the train back if necessary (and have a good lunch in hebden to boot). Weather was good from the start, plenty of snow but the ground wasn’t frozen. 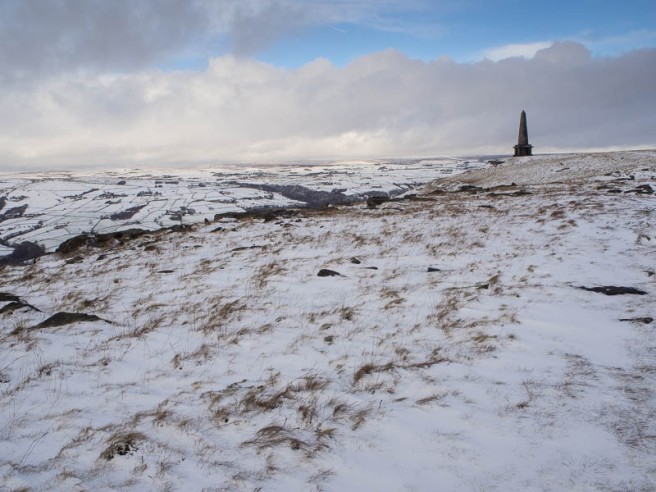 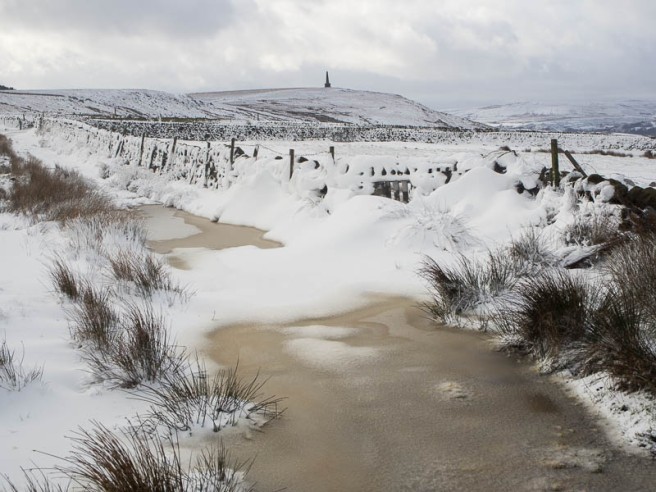 There was wind all day and the snow was powdery and this meant some great snow sculptures, especially on the grass and on the lee side of stone walls where the snow funnelled through. 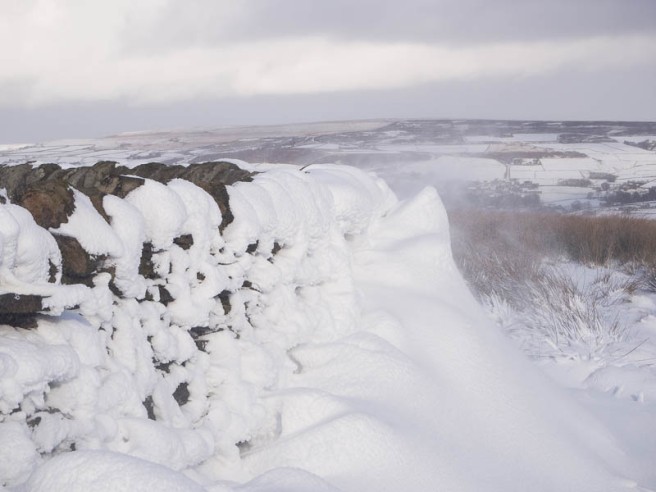 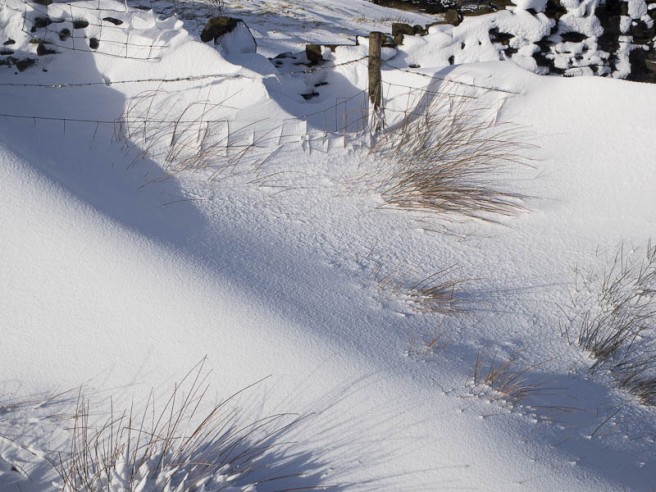 I took a different higher level route to Hebden, that I hadn’t been on before, which worked out well. As I arrived into town, the first snowfall of the day also arrived with a vengeance, leaving me plastered in snow within a few minutes but I could dry out and have a great lunch at Greens.

After a slap up lunch I couldn’t decide whether I had the time or energy to walk back but eventually I decided I couldn’t face the train and knew I wanted to keep walking. I had about two and a half hours daylight left. The weather had turned much more showery, with intermittent very heavy snowfall. I took the Calderdale way, which I knew well but as I got nearer to home it was getting dark and I had to run where I could to make up some time. The paths were covered in snow and it’s a maze of walls and fences so getting stuck in the dark wasn’t attractive, but I knew that there were some clear roads on the way as escape routes if necessary, so I had some contingency. I managed to get to clear, well known paths with just enough light but it was almost full dark by the time I got home, by this time pretty well wet on the outside from the heavy snow. 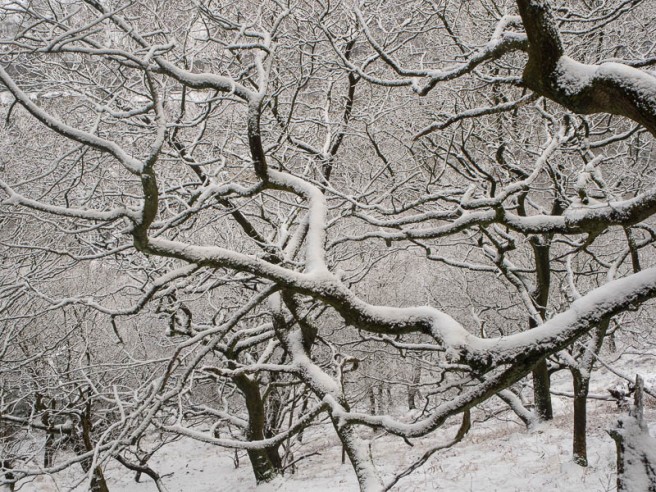