In a depressingly drear winter monday looked great. Lots of sun, cold, no wind, and the chance of snow and ice adventures. I didn’t decide on the walk until I was nearly at the lakes and could see the hills. Incredibly white, so I wasn’t limited to the highest. I settled on wetherlam. I knew this had quick access. I’d been stuck for forty five minutes in a motorway jam so a quick up and down was needed. Wetherlam also has a most entertaining scrambly finish to the summit, which I thought would give sport.

There was ice and a dusting of snow in the car park so conditions looked wonderful. Views were incredible right from the start. The bracken was rust red, the hills yellow-white, the trees stark and bare and as I got higher the sea and the lakes came into view. 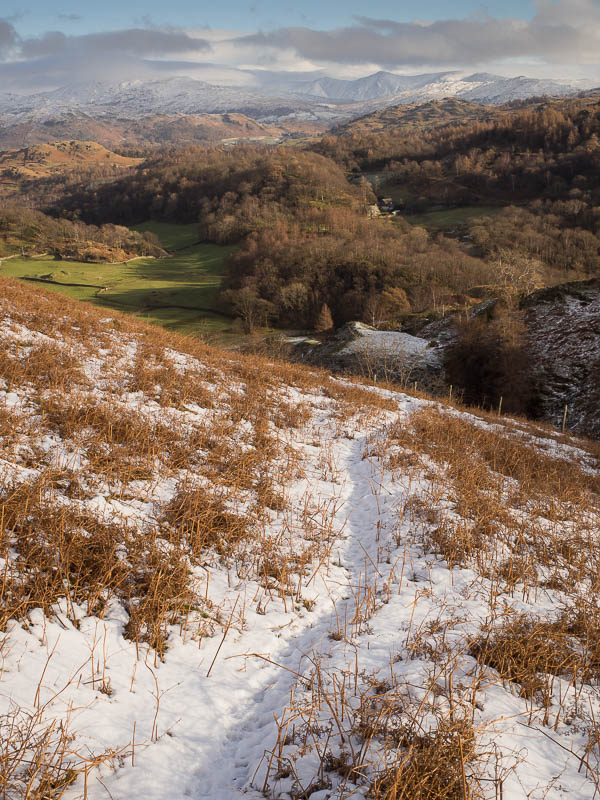 Navigation was easy until the wide track narrowed and the footprints ran out and I had to make my own way up the increasingly steep rocky ground but the deep snow meant I could make my own way.

As I neared the start of wetherlam edge I met two men coming back who said they’d turned round because of the icy conditions higher up, which sounded like just what I was looking for.

The summer route up the scrambly rocky part was invisible but someone had set a trail of crampon marks in the snow and whoever it was had chosen a good way. Part way up I put my own spikes on and got the axe out. The route was really nice, with a mix of ice, neve, and powder as I zig-zagged up the rocks to the summit.

With only one other person at the top, it was perfectly still with a blue sky and just the right amount of cloud for great photos.

The way down should have been an easier path but with no traffic to leave footprints I had to guess the way based on compass bearings and the map. I went steeply down deep powder snow through what would have been an awful boulder field but the snow made it fairly easy, until I could hop over the beck at the bottom and find the return path.