This is Brixham, in Devon, at half past seven in the morning in September 2010. I often trawl (pardon the pun – see below) through my Lightroom catalogues on rainy days, looking for forgotten shots that deserve processing and publishing.

This shot was taken during one of our holidays doing the south-west coast path. I don’t get many great shots from holidays. I don’t see the sunrises or sunsets so easily and it isn’t easy to spend a long time composing when someone else is with you. This shot was easy though, as I took it from our hotel window before breakfast. We were only there for an evening and morning and the rest of the time it was distinctly greyer but the sunrise was wonderful and I love the pastel colours of the jumbled houses. I thought my wife, Joy, would enjoy it because I don’t often show her all the pictures I take on holiday and she hasn’t seen this one before.

The raw file was pretty good so Lightroom processing was kept to a minimum, the only really extreme adjustment being to turn Clarity right down to -100 to get the soft dreamy look.

PS: The above-mentioned pun is because there is a type of trawler called a Brixham trawler. I honestly didn’t think of this when I used the word trawl.

Joy and I did a walk in the Llangollen valley a few weeks ago, taking in the spectacular Pontcysyllte aqueduct, now a world heritage site. There are several other almost as spectacular arched bridges along the way but best of all were the acres and acres of wild garlic in the woods all around. Here are some shots showing both the natural and the man-made. 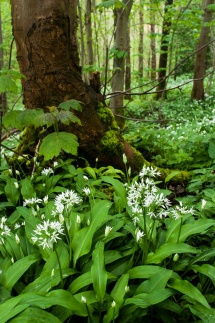 Bristly Ridge is one of the best known scrambles in Wales. It’s only grade one but has some great exposure and positions and is an adventure all the way. The scrambling starts at Bwlch Tryfan, the saddle between Tryfan and Glyder Fach, and it’s often done in conjunction with the Tryfan north and south ridge traverse. I’m not fit enough for that at the moment, perhaps later in the year.

This was a perfect day for it, bright, not too windy, not too warm, and not too busy. Navigation to Bwlch Tryfan is fairly easy and the paths are good except for the steep, loose, slog from llyn Idwal to Llyn Bochlwyd.

The mountain scenery around Ogwen and Idwal is, in my opinion, second to none. Sharp peaks, acres of rock, deep blue lakes, and a distant view to Anglesey. With very easy access from the car it has to be one of the best places in Britain for mountain adventures.

As soon as you leave the shores of Idwal to climb above the climbing crag of the Gribin Facet you leave any crowds behind. The views of the lake and of Y Garn and then down the valley to Anglesey get better and better. Then you reach the quiet lake of Llyn Bochlwyd in its spectacular cwm with a great view of the west face of Tryfan.

Upwards easily to Bwlch Tryfan between the rocky arms of Tryfan and Bristly Ridge and a welcome break with a sandwich and to watch the line that people were taking to start the scrambling. I hadn’t brought a guide book with me so I was relying on the route being very well marked by the passage of countless feet and hands.

The trodden route seems to lead most naturally to a very obvious cleft in the rock, which seems to provide a good route up. Reading the guidebook when I returned, I’m not convinced it was the right way but it’s the way I took and it was, indeed, well worn and polished. The scrambling was good, up the narrow gully between steep rock walls. The moves were good and satisfying but not hard until a section is reached that is very loose underfoot. This led to an awkward chimney that gave a tricky couple of moves.

Eventually you leave the gully to see great views of the Ogwen Valley. At this point I was definitely back on the proper line – there was nowhere else to go. The scrambling continues over towers and blocks with some tricky moves and exposed positions. It’s never that hard but sometimes it’s comforting to have someone to follow because it isn’t clear that the route you’re taking won’t lead you into trouble. At one point I had a nasty couple of moves downwards to get down off a block which I could have avoided on the right.

Finally I arrived on the wide summit plateau. Moonscape would be a good description. Huge shards of rock stick out at all angles, creating fantastic rock sculptures all over. The most famous of these is Castell y Gwynt, the Castle of the Winds. There’s plenty of easy scrambling still to be done if you want it, traversing over these jagged outcrops. The views are panoramic and, light and haze permitting, you get a particularly good view of the Snowdon Horseshoe.

A good way down is to scramble down the Gribin Ridge back towards Llyn Bochlwyd but I’ve done this several times and it’s hard work. The easier way (longer but more straightforward walking) is to continue over Glyder Fawr summit and down to the Devil’s Kitchen. This was mostly fine but about half way down from Glyder Fawr summit the path seems to drop away vertically. When you look over the edge you see that it’s still there but much steeper on an almost-bare scree slope. I was on my backside several times during this most unpleasant loose section so I had a nice sandwich break at the tiny tarn in the cwm between Glyder Fawr and Y Garn, before the descent into Devil’s Kitchen.

This next section is very steep but the path has been laid with blocks so it’s good going. The rock scenery is fantastic. You have the choice either left or right around Llyn Idwal. I chose right, so I could look at the climbers and go and lay hands on the perfect rock of the Idwal Slabs.

Not far now back to the car. 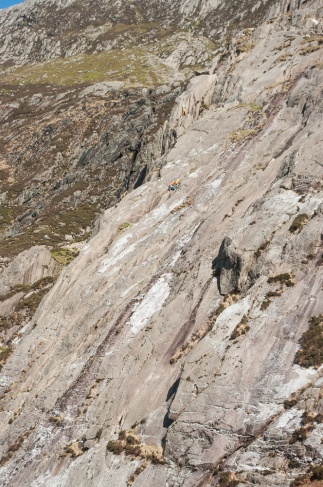 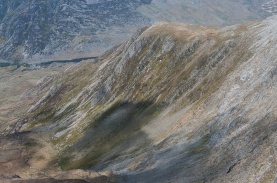 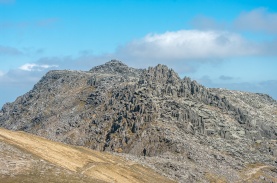 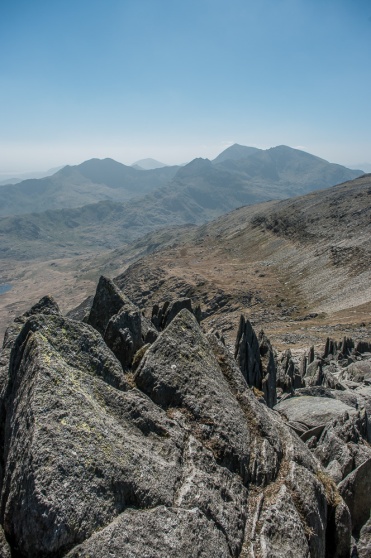 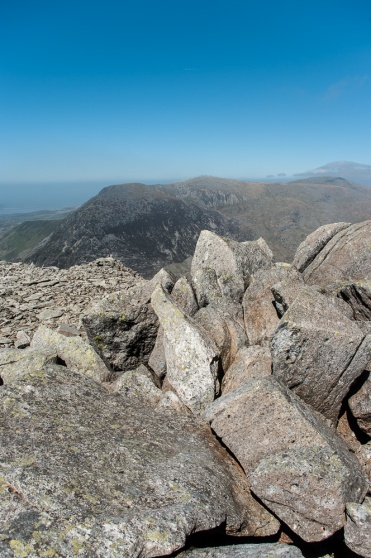 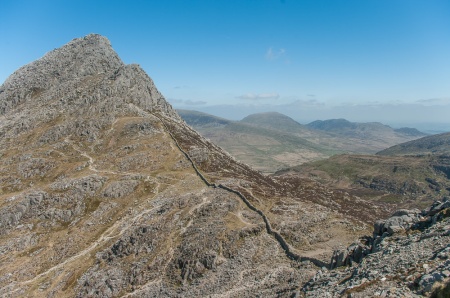 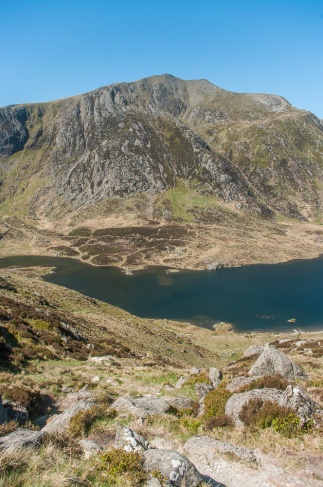 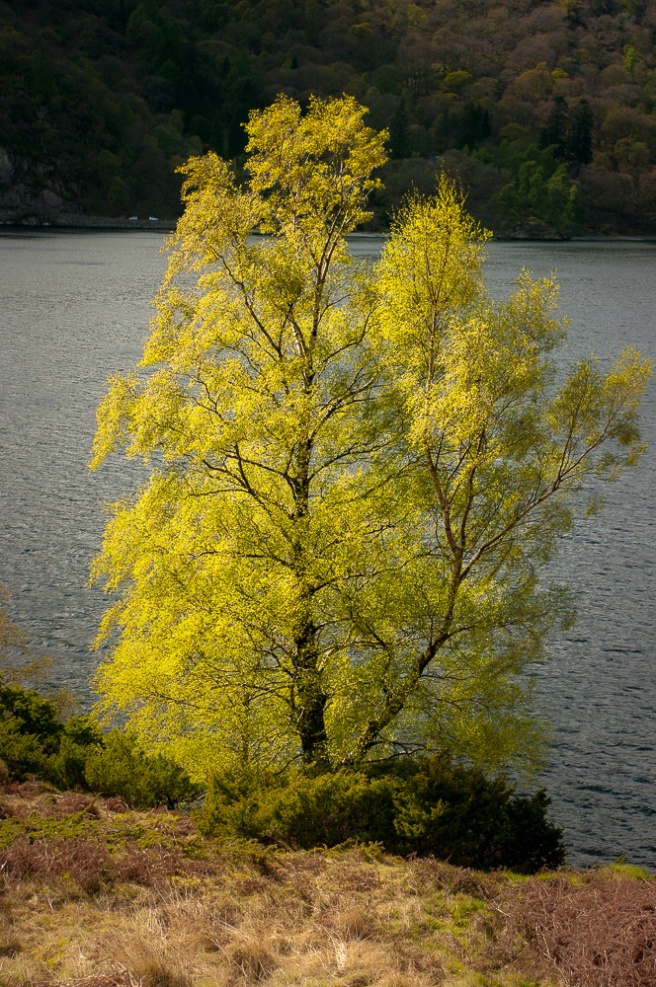 Sorry about the lack of posts recently, been distracted…

I haven’t been going out on big mountain walks for quite a while due to achilles tendon problems. Now I think it’s time to say sod it to the achilles tendon and go walking regardless. For this Cumbria trip, I fancied Place Fell.

Place Fell is a high of modest altitude but big attitude. It sits in a prominent spot at the southern end of Ullswater. I’d been looking for viewpoints around Ullswater for a while and had been thinking of Place Fell but I’d never been up there. The obvious starting point is Patterdale. I chose further up the valley at Brotherswater because I’m a cheapskate and you can park for free there.

You can start out walking through very pleasant woods on a path just next to the road but eventually you’re forced onto the road until Patterdale. This is a handy spot to buy sun cream and a hat in case you’re stupid enough to have come out without either on a sunny spring day. Obviously I would never be that daft.

Over the river now and then up the path to Boredale Hause. Turn left here and follow the steep path to Place Fell’s rocky summit. The spectactular 360-degree panorama includes Ullswater, Helvellyn, High Street, the Patterdale Valley, and Blencathra. It was somewhat spoiled though by the icy cold gale blowing at the top which meant you couldn’t stand in the breeze for more than a few seconds before retreating to shelter. I donned all the clothing I had to try and keep the cold out.

Now to descend northwards towards the lake and the hidden surprise of the Lowther Tea Room. I was heading for what I thought was just another stone barn, to sit and have a sandwich. Only when you’re standing right in front of it do you realise it’s a tea room right by the lake. I didn’t go in (did I mention I’m a cheapskate) but it looked very nice.

The return is on the lakeside path. The trees looked particularly beautiful in their early spring foliage. From the head of the lake, I stayed on the east side of the river all the way to Hartstop for a beautiful day out. 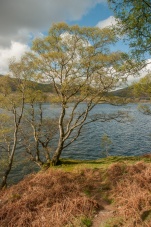 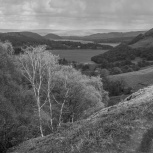 I wrote about iZettle some time ago when I got myself an iZettle credit card reading device. I was delighted with it at the time but I had taken a chance because officially my phone wasn’t a supported device. This finally bit me, as the card reader became increasingly unreliable and finally just didn’t work. Fortunately, the customers were patient and I didn’t lose any sales but it couldn’t carry on.

So I checked with iZettle and I’ve spent £70 on a new, bluetooth-connected, iZettle reader.

This worked first time out. Set-up was easy and in fact, compared to the previous model, this one is almost instantaneous in use. I no longer need to engage the customer in polite chit-chat while we wait for the swirly image on the phone to indicate “ready”.

In use, it’s basically the same as the old device except you don’t need to plug it into your phone. I’ll write again if I have any trouble with it but for now I’m going to be optimistic and assume it will work.

Today we went walking in the most garlicky place I’ve ever been – around the world heritage site of Pontcysyllte in the Llangollen valley, north Wales. Acres and acres of wild garlic in the wood and along the river banks, all in full flower. I took a few shots, here’s one of the better ones. Apologies for the recent dearth of posts, I was a little under the weather.

By the way, this is an example of a picture that looks quite different on my laptop screen than it does on my calibrated/profiled external monitor. God knows what it’ll look like on your screen. Colour management – pah!