Starting with red, we have Red Screes, a great viewpoint with easy access. The summit is about 750m but you start at the top of Kirkstone pass at about 450m so height is easily gained. Once there you have a 360 degree sweep all round lakeland.

I had planned an overnight photography trip, using my bivvy bag so I could doss down at a suitable location and get both sunset and sunrise from the same place. I worked out a good likely spot near Aira Force on the north-west side of Ullswater. As usual, I was distracted from this plan by the fantastic scenery I saw as I drove up Kirkstone pass and I pulled in at the car park by the Kirkstone Inn. I couldn’t help myself and off up to Red Screes I went.

I was taking a chance with an uncertain weather forecast. It had rained heavily already on the trip and there was a lot of cloud around. There’s not much point going out for sunset photography when there’s no sunset and to spend an uncomfortable night on hard ground in a plastic bag and not get any shots in return is too much. The sun did start to break through, though, and this was encouraging. The best shots come from a mixed sky so I carried on and started on the path up the hill.

Not much colour to start with, the rest of the rainbow came later that night and in the morning. Some broken cloud gave some early drama as the sun peeked through but mostly I just slogged up the steep and scrambly path to the summit, at which point the rain started to threaten. I could see it coming, it seemed to be on all the hills around me but not actually on me. That soon changed but it wasn’t heavy, it just put a stop to the photos. Once it cleared the sun was low and I had some proper colours. Purples, pinks, mauves and blues. Then the cloud came. A big bank, I could see it coming towards me. It looked dry but I knew I’d be in thick mist and soon there it was. Another half hour reading my book and then I could see some orange to my left (the west) and I knew it was thinning. Then all of a sudden it was gone and the sun was there low on the horizon, not far from setting. More oranges, purples and reds.

I finally settled down for bed about 10:30, though it was still pretty light. I set the alarm for 4:15. I wouldn’t be asleep of course, it was just to remind me to get up.

I was actually slightly asleep when it went off. I didn’t want to get up, mostly because I knew how cold it was going to be when I did. The inside of the bivvy bag was soaking wet with condensation. However, the sky was clear dark blue and I could see a small moon high above and some fire in the sky on the north-east horizon. I got up and ran round trying to stop shivering and make the pain in my cold hands go away. It was COLD! Operating the camera with numb hands was tricky and slow.

The sun first appeared over the tops at about ten to five. There was a cloud inversion to the south but it wasn’t getting any colour yet so I concentrated on the view north. Reds and oranges and dark blues to start, soon changing to flaming bright orange. Then yellow and vivid green. A fantastic sunrise, worth every shiver.

All pictures taken with the Olympus OMD-EM10 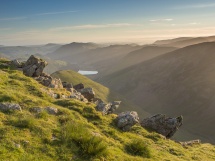 Low clouds over Windermere, the Howgill Fells in the distance

Sunrise, Helvellyn in the distance 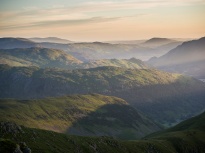 Helvellyn and Striding Edge at sunrise from Red Screes 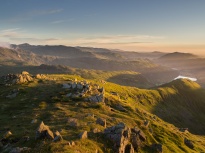 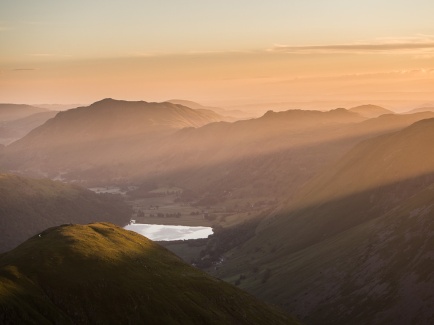 Sunrise seen from Red Screes looking down to Brothers Water 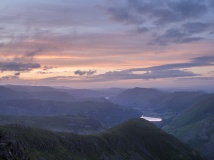 Ridges between Grisedale, Deepdale and Dovedale in the purple pink sunset after rain

Purples and pinks after the rain at sunset 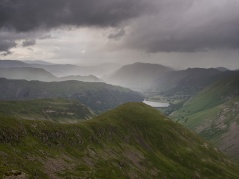 Rain over Patterdale and Ullswater in the distance 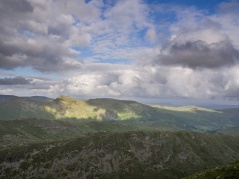 Cotton grass on the broad back of Red Screes looking wesr

Cotton grass, with “The Struggle” in the background, the aptly named road from the Kirkstone Inn to the Ambleside road.

6 thoughts on “All the colours of the rainbow”